Our babies are moving beds…

Posted on September 10, 2014 by mummystodolist

The last week has seen a bustle of activity and deliveries arriving that confirm yet another new milestone will very shortly be reached by the two little people in our house.

A toddler bed is now stashed in our garage while we await the arrival of its accompanying mattress. Alongside it is a new cot mattress. Hidden away in my bedroom cupboard is the pretty, if not ever-so-slightly-sickly, pink princess duvet set that Little Miss can’t wait to get her hands on. A second woodland themed set is on its way. And the much less exciting mattress protectors arrived this morning.

Big changes are afoot. Little Miss will soon leave behind the cot that has been her sleeping place for more than two years. And Little Mister, at ten weeks old and on the 98th percentile for height, is fast outgrowing the crib he’s occupied since the beginning of July. The same crib that his older sister slept in for the first four months of her life.

It’s hard to imagine Little Miss now as that tiny baby, much smaller than her brother, sleeping next to me in that little wooden crib. She will soon have her eagerly anticipated ‘big girl bed’and Little Mister will be able to enjoy the extra space of his big sister’s old cot.

It will feel like the end of an era. I’m not sure which move is more emotional. Once the crib goes away it could be for the last time. We haven’t yet decided whether we’d have one more child or not but realistically speaking it seems unlikely at the moment. So this could be the end of all things newborn.

Little Mister in the crib.

And then there’s Little Miss leaving the ‘babyness’ of her cot behind. She’s always been on the small side, so we never had any worries about her being able to climb out of the cot – she still can’t now. The move to a bed, all-be-it a little toddler one, reminds me how grown up she is becoming, how every day she becomes a little bit more independent, less baby and more little girl. It’s lovely to see but at the same time nobody likes time to pass too quickly. She’ll be a teenager before we know it!

We’re hoping the transition will be a smooth one. I’m not too worried about Little Mister. His sister was fine when she moved up from crib to cot and their temperaments so far have been pretty similar. Hopefully he won’t notice the little teeth marks Little Miss kindly added for him at one end quite recently! 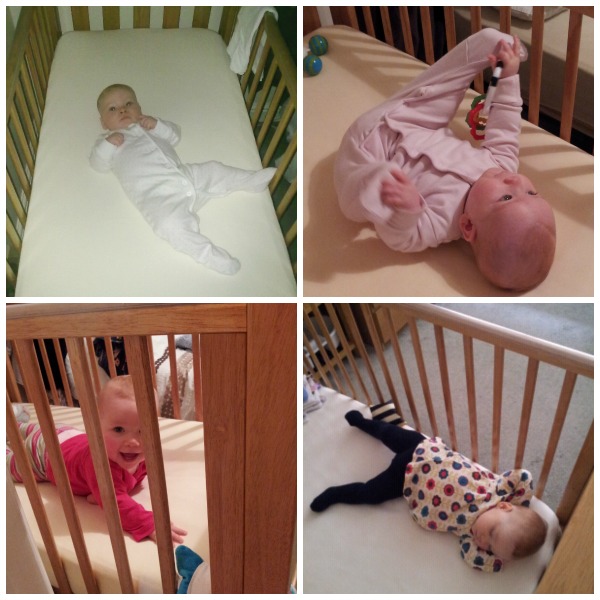 Happy times in the cot! Top left was her first night in it in August 2012.

Little Miss is the one I’m more apprehensive about. She seems excited about having a new bed but toddler’s are unpredictable little creatures with a talent for changing their minds. She’s always been a good sleeper so I’m praying she can retain this good habit, not least because our nights are already broken by the feeding needs of her brother.

Again he’s pretty good and we’re generally down to one middle-of-the-night feed now but I have to confess I’m a bit of a wimp when it comes to lost sleep. I know I have it so much easier than many parents do but even that single one hour wake-up in the early hours can still knock me for six some days.

Only time will tell whether or not, given her new-found freedom, Little Miss will become a night-time wanderer!

If anyone has any tips for making the transition from cot to bed then I’d love to hear them!

6 thoughts on “Our babies are moving beds…”