Posted on January 28, 2016 by mummystodolist

One of the main reasons I started this blog was to record some of those magical little moments in our young family’s life. Things that will become a little more hazy as the years pass.

Well, on New Year’s Day our little man turned 18 months (sorry son that it perhaps didn’t have quite the same fanfare that your sister’s 1.5 year birthday did, what with it being just after Christmas and all that!). But 18 months he turned and that certainly warrants an update on our second, not-so-little, bundle of fun.

The last month or so has really seen him finding his voice and he’s increasingly stringing words together into simple little sentences – well, more often than not polite-ish demands. He’ll repeat almost anything you ask him (careful!) and, as I say, he’s definitely getting better at expressing what he wants! One of the first requests was “out please” (manners maketh man!) when he’d finished a meal and was done with his highchair. Predictably enough, many of his new phrases revolve around food – “Daddy, me cake” while pointing at the kitchen was said last week!

He loves to perform a mini role call, going through all the people in the room, pointing at them and saying their name. When his sister and I had to spend a night away in hospital recently (more on that in another post), he went round the house looking for her and calling her name.

As well as the cute stuff, “no!” and “mine!” are also being squealed more and more regularly! 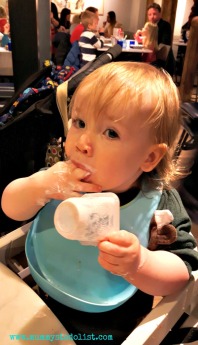 Who needs a spoon? A whole hand is much quicker!

As hinted earlier, his love of and capacity for food remains a constant source of wonder. While he is very easy to feed – he will eat pretty much anything (including foliage!) – meal times have become more stressful of late. We pretty much face a race against time to get our food into us before he finishes his because woe betide we dare have food left on our plates when he has none.

His meal times currently end with a Greek flourish when, unless intercepted, he hurls his plate to the floor. This is often followed by a dramatic meltdown when he realises there really is no more food coming. The end of a nice pudding is the worst. He stood in a corner sobbing uncontrollably for a good ten minutes when the crumble ran out on Sunday night! A week ago he lay sprawled on the floor in despair at the end of strawberry frozen yoghurt.

But he is the most lovable, soppy little boy too. He’s always keen for a cuddle and the way he says mummy and snuggles in makes my heart melt. He’s especially affectionate when he’s wrapped in a towel, fresh from the bath. He gives kisses now too, although he tends to open his mouth  and make a noise rather than pucker up properly.

His hair is getting longer and it won’t be long before he needs his first cut. He was referred to as a ‘her’ for the first time ever last week! He’ll probably be joined at the salon by his big sister, who has also never seen a hairdresser and is due a bit of a trim.

Little Miss recently told us that she wanted her brother to be a girl! But on the whole they get along pretty well. They looked very cute in the shower together tonight. Little Miss holding his hand to keep him safe and sharing the shower nozzle with him, which she had in the other hand. A few weeks ago at nursery we were told that she and a friend had been pushing him around in a little car when the older children joined the little ones for playtime. And she definitely looks out for him when we’re out and about and other children are around.

That said, his increasing independence and ability to get involved in whatever she’s doing can be a source of frustration for her. He loves to copy her and has started taking her dolls. He calls all of them Wah Wah (the name of her favourite doll) and is also keen on pushing a buggy around. Thankfully Little Miss got a new one for Christmas so he has kind of inherited her old one. It stops some of their scraps. Just some of them! If one has something then invariably the other one will decide they want it so the squabbles are certainly on the increase.

Little Mister also loves pottering around the play kitchen, building with the shared Lego and pushing cars around while saying “brum”. He’s also become keen on stickers, although tends to make a mess with them, he’ll happily scribble and he’s become a whizz with all of the different shape sorters we have in the house.

Everything new is a source of wonder for him. It’s a lovely stage. And he so wants to help and join in with everything. one of his latest things is to get his breakfast bowl out of the cupboard. Quickly followed by getting his sister’s and taking it to her while calling her name – see they do love each other!

He still hates having his nappy done, unless distracted, and seems so much stronger in his refusals than she was. But we think he is possibly becoming aware of when he wees. Maybe a fluke but he definitely now knows the word and what it’s associated with.

I didn’t really want to end on nappy etiquette but I could go on and on here and it’s getting late! Hopefully in the coming weeks I’ll be able to get into a more regular writing habit again – I don’t want my next post to be when Little Miss turns four! Yes, that next birthday is rapidly approaching and I’m feeling a bit emotional about it! Catch up again soon.