Posts Tagged With: Learning to talk

Posted on February 22, 2016 by mummystodolist 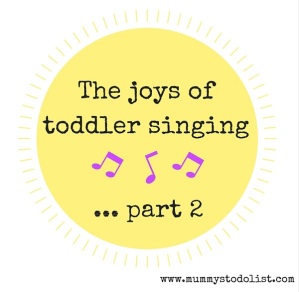 Over the last week Little Mister has started to find his singing voice! Ok, so it’s not really proper singing yet, more repeating certain lines, but he is attempting to follow a tune. And it is so cute.

His current repertoire is very heavily influenced by his older sister – Let it Go from Frozen being his favourite. He gave us a few rounds of that one in the early hours of the morning on Saturday night but it was so sweet we instantly forgave him for keeping us awake. He’s also tried to copy Little Miss singing along to Angelina Ballerina.

Little Miss has always been a little singer and as a baby loved being sung to from just a few weeks old – amazingly even by us! She was singing the Angelina Ballerina theme tune at the top of her voice as she pedalled along happily on her little bike on Sunday afternoon. I loved the way she was so content in herself, so unselfconscious, in her element, in her own little world.

I’ve been told that singing is a sign of a happy child. I really hope so. I hope they’ll always sing and always feel secure in themselves to do so.

Hearing Little Mister  trying to sing in his cot reminded me of a post I wrote about his sister almost two (gulp, two?) years ago. She’d started to her sing herself to sleep with Twinkle, Twinkle Little Star. Hence I called this post ‘part 2’ as we’re getting to enjoy those magical moments all over again.

Little Mister seems to be just as keen on music as his sister’s always been. For a long time now he’s responded to hearing music by starting to sway or do a little dance. He definitely responds to rhythm, perhaps even more than she did. Nursery often tell us how much he loves the singing they do there too.

So I’m loving sharing music with them both at the moment. We got into the party spirit on Spotify over the weekend, meaning both children now know how to do a Conga! An essential life skill, I say, and a standard at every family wedding we went to back in the 1980s. You’ve got to love a bit of Black Lace. Who remembers them? Superman also went down well. I’ve yet to even break out Agadoo.

Anyway – I’m getting sidetracked by the nostalgic cheese – the new-found singing ability is obviously all part of Little Mister developing his language skills. At nursery they say he holds little conversations between the toy animals when he’s playing with them.

He copies so much of what he hears now. My current favourite is “leave it!” which makes me laugh even when it probably shouldn’t. It’s usually said during nappy changes.

And on that note, it’s getting late so I’m going to take my own advice and call it a night!